Cyclamen Species for the Garden

The hardiest species of Cyclamen are hederifolium, coum and purpurascens. C.hederifolium and purpurascens have been known to withstand prolonged freezing at -22 F°. C.cilicium, and pseudibericum are less hardy in some situations. Frost-tolerant but not able to withstand prolonged freezing is repandum. All garden situations are different so some of these may grow well in cold winter areas or not. In terms of ease of cultivation hederifolium and coum top the list and anyone wishing to grow cyclamen should start with these species. Later on give cilicium and the hardier forms of repandum a try. With these four species bloom can be attained almost year around.

It is always helpful to keep in mind that cyclamen are in growth during the winter months when choosing a planting location. Of these species the seed of hederifolium and coum are the quickest to germinate and flower. The others take more time to reach a blooming state. Flowering times begin with coum (Feb-March), pseudibericum (March-April), repandum (April-May), purpurascens (July-Sept), hederifolium (Aug-Oct), and cilicium (Sep-Nov). There are a number of other hardy species, parviflorum, alpinum, colchicum, elegans, intaminatum, and mirabile. These species are either not widely cultivated, difficult to obtain, or not suited to the open garden.

Cyclamen hederifolium is native to woodland, scrub, and rocky areas in the Mediterranean region. The most widespread Cyclamen species it is found from southern France to western Turkey and Mediterranean islands. Growing from sea level to 4200 ft. in woodlands, scrub and rocky areas. It is the hardiest, most robust and easiest to grow. Hederifolium self seeds freely and if left undisturbed will naturalize. Tolerant of all average garden soils it can also grow in areas with more sun.

Deep to light pink blossoms on stems 4 to 6 inches in height appear in late August through October. In cultivation white blossoms develop on some plants. Large foliage lasts until late Spring and in a colony creates an almost evergreen ground cover. The foliage shape can vary widely from ivy-like, heart shaped, to spear like. Foliage color may be green with a symmetrical darker green or silver fractal pattern. Tubers of hederifolium increase in size and it is not uncommon to find older tubers the size of a small dinner plate. These larger and older tubers produce an amazing profusion of blooms. They are very long lived. 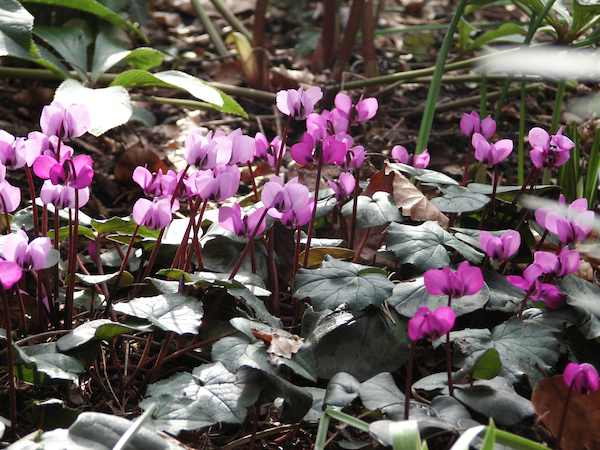 Cyclamen coum is native to two areas, the mountains and coastal areas that border the southern and eastern Black Sea coasts, and southern Turkey south to Israel. It is found amongst rocks and roots in deciduous and coniferous woodlands and scrub, similar to hederifolium in ease of cultivation and conditions required to flourish. Coum produces many seeds, self sows and will colonize an area. Coum should not be planted in the same bed as hederifolium as it will be overtaken by the more robust species.

Foliage usually appears first in Autumn. Round small leaves may be all green or have some fractal like pattern. Blooms are pink to carmine or white, 4 inches in height and have rounded petals. Blooming occurs in winter, usually January through March. Coum is a smaller plant than hederifolium and it's tuber reaches a size of 2 1/2 inches across. 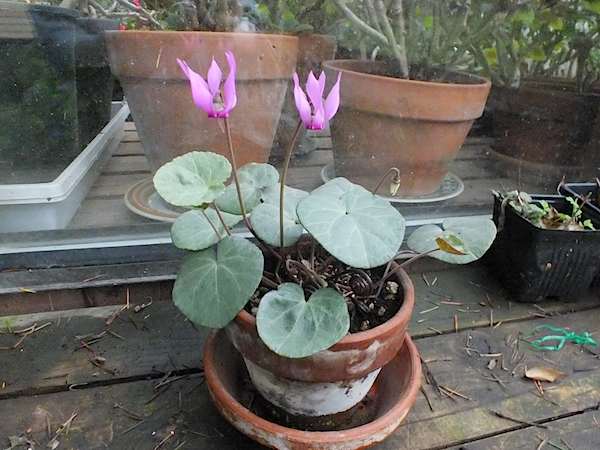 Cyclamen purpurascens is native to southern and eastern Europe as far north as Poland. I is found amongst shaded roots and rocks, in deciduous and mixed woodlands over limestone, at elevations of 800 to 4250 ft. It is a woodland plant most commonly found in beech forests growing in leaf litter that can be a foot deep. This Cyclamen species is unusual in that it is almost always in leaf and doesn't enter a dormant period like others do. Watering should be continuous throughout the year. It is very hardy having been successfully grown in quite cold areas such as Alberta Canada.

Blooming occurs summer through fall. Blooms are light pink to deep magenta with petals slightly twisted and have a sweet fragrance. Leaves are heart shaped wider than they are long. Foliage color is green and can have symmetrical silver markings or be all a light silver wash. C. purpurascens can be reticent to set seed and when pollination occurs the seed pod may take up to a year to mature. Germination of seed is also slow taking up to a year to sprout. A very atractive plant it does best in a moist deep leaf compost, but is very slow to naturalize.

Cyclamen cilicium grow in the Taurus Mountains of southern Turkey, a part of the ancient kingdom of Cilicia, at elevations of 2300 to 6500 feet. It is found growing in coniferous forest among rocks and scree in shade or partial shade. C.cilicium is not as robust as hederifolium or coum and takes longer to establish in the open garden being not quite as hardy in severe winters. It readily self sows and a small colony can develop over time. It prefers growing in partial sun and needs some water during the summer months. Blooming in Autumn the wild form has light pink blossoms. Blossom petals are twisted with a narrow nose on delicate stalks. The cultivated form C.cilicium album has white blossoms and is more vigorous. The foliage of cilicium is deep green with a narrow cream hastate marking.

Cyclamen pseudibericum is found in a very small area of the Nur and Anti-Taurus mountains of southern Turkey at elevations of 1600-5000 ft. In the wild it grows in pine forest, oak and beech scrub, among rocks and roots in deep leaf litter. It has been found growing along with C.cilicium at one site in the mountains of Turkey but more often along with C.coum. It has been brought into cultivation after being rediscovered in 1957, and considered to be one of the most attractive plants in the genus. It can withstand a reasonable amount of frost but is usually grown in the greenhouse. Where it can grow outside it blooms with vigor. Blossoms are large and fragrant in colors of magenta to deep pink. Foliage is deep glossy green with a hastate pattern and appears in Autumn. Leaves are longer than wide up to 3 inches. Blooming in March to May they need ample moisture while in growth.

Cyclamen repandum There are four subspecies of C.repandum with complex varying characteristics found throughout the Mediterranean of which several may be named separate species. Classification, or taxonomy, of these plants is in an evolving state. The areas where they are found to grow in the wild are usually in very moist oceanic climates. They grow primarily in the dappled shade of deciduous or pine woodland and olive groves in deep, damp leaf litter. Though sometimes found in rocky crevices and in moss at the base of trees, dampness is needed at the roots all year. This cyclamen doesn't do well in hot dry sunnier areas. They bloom in April and May. The petals are long and twisted, while the tubers are round with a depression and reach a little over 2 inches across. The tubers are deep chestnut brown, and in age the surface becomes corky, rooting from the bottom.

C.repandum ssp.repandum is native to southern France, Italy and Albania and is the hardier repandum. Blooms are sweetly fragrant and appear with the leaves in colors deep pink to deep carmine magenta. Foliage is deep green with a grey green hastate pattern. In cultivation they do best in the open garden and are difficult to grow in pots. Tubers should be planted deep, up to 4 inches below the soil surface or in deep moist leaf litter. The other sub-species of repandum, though less hardy, may be of great interest to growers of cyclamen as all are very fragrant and will colonize over time creating colorful springtime drifts of elegant blossoms.

C.epandum ssp.peloponnesiacum and ssp.vividum are both native to the Peloponnese peninsula of Greece and found in separate areas. Ssp.peloponnesiacum is the easiest repandum to grow in the open garden or in pots. Plants descended from seed collected at higher elevations tend to be more hardy. Repandum ssp.vividum has very intense coloring and unlike the other repandum subspecies grows in sunnier places like dry open pine woodland, in rocky gullies, and under shrubs in hotter sunnier scrub.

C.repandum ssp.rhodense is widespread on the island of Rhodes growing on hillsides under pine. These subspecies may become classified as separate species from repandum. Grown near each other they can sometimes cross pollinate creating new plants with combined characteristics.