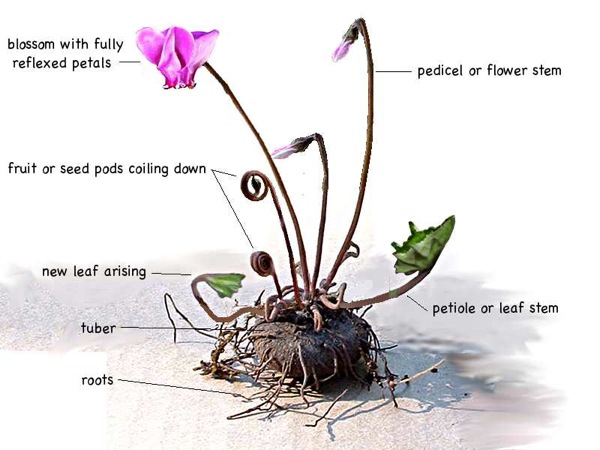 Parts of the cyclamen plant

In the Autumn when most flowering plants are entering winter dormancy cyclamen plants are just starting their season of growth and bloom. The cool wet seasons are when cyclamen flowers and foliage start to grow from the tuber. Growing through the Fall, Winter, and into Spring they enter a brief dormant period in the dry heat of Summer when they release their seeds. All the Cyclamen species grow in this basic pattern with variations. Some will bloom in late summer and fall, others in winter, or spring. Growing several species of cyclamen would make it possible to have blooming cyclamen in every season of the year.

Tuber The tuber is the storage organ of the cyclamen plant. The name cyclamen derives from the Greek language and closely translates as 'circle form' probably as the tuber is a round disk shape. Similar in appearance to a crocus or gladiolus corm it has led many to refer to it as a corm but technically it is a tuber. There are many variations in the size, skin, and position of roots in the tubers of different Cyclamen species. It is possible to identify many of the species just by examining the tuber. Flowers and leaves form from nodes on the top of the tuber. Mature tubers may grow a fleshy stem called a floral trunk producing multiple blooms along it's short length. Roots are thin and fibrous and grow from the shoulders, sides, or bottom of the tuber. Some have a a smooth skin while others develop a rough corky surface with age. The tubers are long lived and some get quite large while others remain very small. In the wild tubers are usually found growing at or just above the soil surface.

Foliage Cyclamen foliage arises directly from the tuber on an individual stem or petiole. The petiole may ascend vertically or horizontally before bending towards the soil surface. The leaf blade faces inward and is folded in half before flattening out or taking a cupped shape. The foliage can last for most of the year creating an almost evergreen ground cover in a colony. In early summer the foliage will dry up without much remaining.

The foliage of different species varies considerably in shape, size, and coloring. Foliage shapes are symmetrical and can be round, heart shaped, spear and hastate or ivy like. The average leaf size is about 2 inches across but can be much larger or smaller on the same plant. Leaf margins can be smooth, toothed, or scalloped. Foliage shape, color and pattern varies so greatly, even within a single species, that this feature is unreliable in species identification. Intricate fractal patterning can repeat the shape of the leaf in white, silver, cream, or pewter. Some species have blotches, dots, or dashes and can also be a solid color of green or silver.

Flowers The flowers of Cyclamen with their upswept petals are unlike most any other. The pedicel or flower stalk grows from the tuber in the same manner as foliage. The flower bud tip always points downward and remains so as the petals, normally five, reflex upwards. The petals or corolla may be colored in shades of pink, magenta, red, and white with a distinctive mark or blotch at the base. Petals in different species vary in shape and may be narrow and twisted to broadly elliptical or round. The majority of species have some fragrance that is sweet and pleasant. Viewed from beneath the opening of the chamber containing the stamens and style is pentagonal in shape.

Cyclamen are geared to cross pollination within the species as the stigma is ripe before the pollen is ready. Some species will cross pollinate but this is unusual as blooming occurs at such different times. Pollination is usually accomplished by some type of insect or bee. There is some evidence that self pollination is possible. Tapping a blossom when the pollen is fully developed and a shower of pollen will fall possibly attaching to the stigma.

Seeds Once pollinated the petals release and fall. The stem slowly coils carrying the seed pod down to the ground beneath the leaves. C. persicum is the exception as it's stem bends to the ground without coiling. The seed pod will swell and develop until ripening the following summer. The seed pod can contain as few as 5 seeds or over 50. When ripe the pod becomes soft and will split open from the center with triangular edges peeling back to expose the seeds. The seeds are coated with a sticky substance that ants seem to especially enjoy. Ants will carry off the seeds and consume the sticky coating discarding the seed. The seeds are creamy in color but quickly become brown when drying out. As they dry the kidney bean shape becomes angular. Seeds will sprout in five or more weeks and in some species up to a full year later. A tiny white round tuber forms with the first leaf and is of the same hardiness as adult tubers.