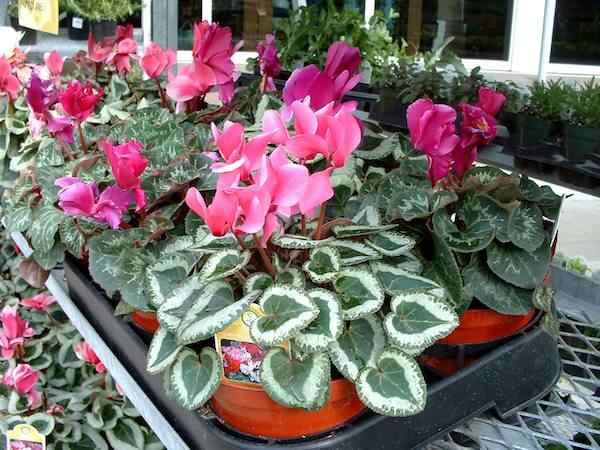 In the U.S. most first experience Cyclamen as potted florist cultivars of C.persicum. The cultivars we see today are the result of well over a century of hybridization of wild persicum. In Europe growing and developing these hybrids has become an important commercial industry producing varieties for greenhouse growers in Europe and North America. There are named cultivars of other Cyclamen species but not produced on a large commercial scale in the numbers that C.persicum cultivars are. These cultivars are bred for flower size, color, and short development time. Seeds can produce blooming tubers in 18 months which is half the time needed by other species. There are hundreds of named varieties in colors from white, pink, magenta, to fiery red and bi-colored. The flowers are tall with large petals and wide cabbagy leaves. They are very frost tender and not likely to survive a winter in the garden unless you happen to live in an area without frost.

The proper care of these plants will result in a blooming pot plant for many years if some requirements are met. To thrive C.persicum cultivars need no more than 68 degrees during the day in bright indirect light and a night time temperature of 50 degrees. They need ample water in well drained soil and high humidity. As an indoor plant in wintery climates these conditions can be difficult to provide, so are often discarded after blooming as they are unlikely to bloom as well their second year. If you are just starting with Cyclamen the hardy outdoor species such as hederifolium are much easier to grow with success.

Finding the right temperatures and light indoors is probably the most difficult obstacle for most. Temperature must be on the cool side, 50 to 68 degrees. Dry hot furnace air should be avoided or the bloom time will be cut short. Pots can be moved from a bright cool daytime window into a cool garage or basement at night. I have kept them under artificial light in my basement during the coldest part of winter then moved them outside to an unheated greenhouse when temperatures became warmer.

High humidity and ample water are essential while in growth. A tray of water with a layer of pebbles on which to place the pot, so that the bottom is not in water, will help humidity. Misting the plant can also be helpful. Water just as the top of the soil feels dry then water thoroughly. Do not water the top of the plant's tuber just the surrounding soil. A dilute liquid fertilizer applied every other watering will help keep the plant in top shape.

Blooms can last a long time. It is possible to get some seed development by placing the blooming plant outside when temperatures allow so insects can access the pollen. When pollinated the petals will fall and a seed pod will develop. Unlike the coiling stems of all other cyclamen species the stems with seed pods bend down to the ground. Leave these stems so that the seeds will mature. Seeds can be planted and grown the same as any cyclamen seed.

In late Spring to early Summer the blooms will have quit and leaves start to yellow. Stop regular watering and slowly let the pot dry out. Foliage may take another few weeks to dry completely. Regularly examine any seed pods and when they feel soft they will be ready to harvest. Remove any dried stems or leaves and store the pots in a cool, shady and dry condition till fall.

Late summer and early fall is the time to start the watering regime again. Peat based potting soils are difficult to get moist again after drying out so repotting is a good idea before starting to water. The choice of clay or plastic pot and type of potting soil will make a difference in watering frequency. If a little heavy handed with the watering use a soil mixture that drains faster. Adding a little bone meal to the mix will help feed the plant. Cyclamen bloom better in a tight pot so allow less than an inch between the tuber and the side of the pot. The tuber should be planted with the top third extending above the soil surface. Begin watering by thoroughly soaking the pot then water again when almost dry. When new growth is seen start regular watering.